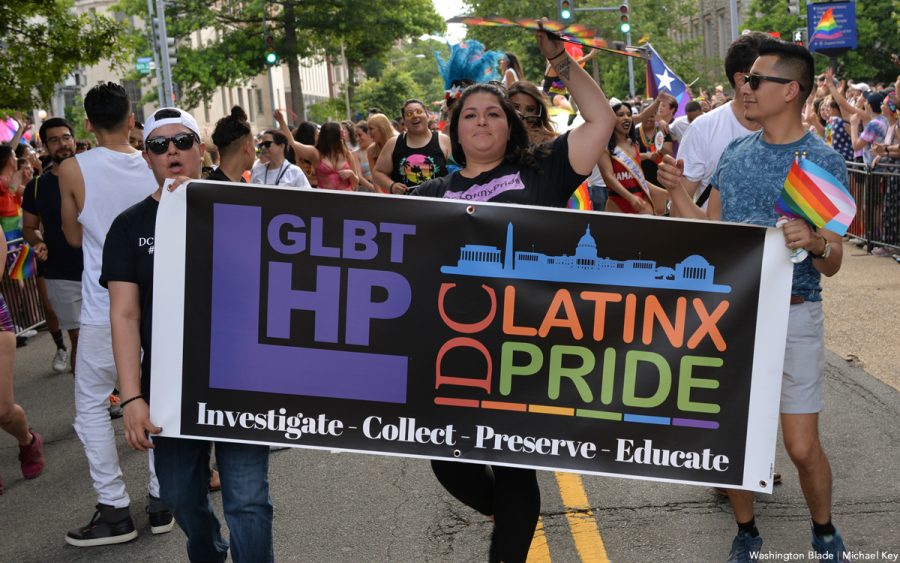 “Latinx” used in the 2019 Capital Pride Parade in DC

The talk around “Latinx”

How the term includes and alienates people at the same time.

Labels are unifying; they establish common ground between large populations and are a fundamental part of our identity. When labels undergo change, it signals a shift in the identity of a population. That’s both exciting and terrifying. Consequently, changing labels unravel a series of questions and debates in society, as is the case with the term “Latinx.”

Merriam-Webster states that “Latinx” is “used as a gender-neutral alternative to Latina or Latino.” The term originated around the early 2000s and was created by queer Latinx people, according to David Bowles, an author and professor at the University of Texas Rio Grande Valley. The term “Latinx” emerged because Spanish is a gendered language. A group of males and females in Spanish defaults to the masculine, so the term “Latinos” includes both males and females. Yael Rosenstock Gonzalez, an author and identity coach, equates using “Latinos” to using the word “mankind” to describe humans; while all people might be implied, the word is “inherently masculine.” Further, “Latinos” does not necessarily acknowledge non-binary people who have Latin American roots.

Currently, the terms “Latino/a” and “Hispanic” are widely used to describe citizens in the US with roots in Latin America and Spain. Although they are sometimes used interchangeably, it’s important to note that they are not interchangeable. The term “Latino” refers to geography; it describes people who are from Latin America. According to BBC Mundo, the label was first used in 1856 by the Chilean politician, Francisco Bilbao, to encompass people in the Americas who speak languages with origins in Latins. “Hispanic,” on the other hand, is a term that solely describes people who speak Spanish. So, someone from Spain is Hispanic but not Latino, while someone from Brazil is Latino but not Hispanic. Someone from Mexico is both. “Latinx” applies to this context because “Latino” excludes non-binary or non-gender conforming people, and many Latinos speak Spanish.

“Latinx is an inclusive term that can collectively refer to people who identify within and outside the gender binary,” say Maria Scharrón-del Río and Alan Aja, professors in the Puerto Rican and Latin Studies department at Brooklyn College. However many feel strongly that the term does not apply to them. In fact, the 2019 National Survey of Latinos, conducted by Pew Research Center, found that only 23% of U.S. adults who self-identify as Hispanic or Latino have heard of the term “Latinx,” and only 3% of them use “Latinx” to describe themselves. The survey clarifies that Latinos and Hispanics between the ages of 18 and 29 who have college experience are the most likely demographic to be aware of the term. Also, those born in the U.S. are around twice as likely to know about “Latinx” than those born in other Spanish-speaking countries.

The study provides an especially intriguing statistic: of those who are aware of the term “Latinx”, 65% say that it should not be used to describe the Hispanic or Latino population in the U.S. There are a few reasons for this view. Luisita Lopez Torregrosa, an author and cultural critic, writes in an opinion article for NBC News: “[Latinos] see the ‘X’ as odd and off-putting because it doesn’t follow the traditional structure of Spanish, making it awkward and difficult to pronounce because in Spanish few words end with two consonants.” Many also argue that the term suggests elitism; it’s “sort of seen as something used inside the Beltway or in Ivy League tower settings,” expresses Diego Garcia, president of the League of United Latin American Citizens (LULAC). Jorge Duany, director and professor at the Cuban Research Institute at Florida International University, summarizes why “Latinx” is unpopular among those it’s intended to designate, saying, “it feels alien to them and doesn’t make much sense from a linguistic viewpoint.”

These discussions have led to “Latinx” being dropped in some cases. In December 2021, Garcia instructed LULAC’s members to drop the term from official communications. While the use of “Latinx” is not banned in LULAC, the president stated that the organization wants to use a term that “everybody uses in everyday speech.” LULAC is the oldest Latino civil rights organization in America. In July 2022, Argentina and Spain both banned the use of Latinx, or any gender-neutral variant, reasoning that “these new terms are violations of the rules of the Spanish language.”

The reality is that making the Spanish language inclusive towards non-binary people is more challenging than doing so in English. Think about describing someone with “they/them” pronouns in English. Instead of saying: “She is pretty,” or “He is pretty,” you say: “They are pretty.” But you don’t have to change the word “pretty” because adjectives don’t have gender in English. In Spanish, however, adjectives do correspond with the subject’s gender. Given the hundreds of gendered adjectives in Spanish, this brings up many questions about how the language can evolve to be more gender inclusive without erasing an important part of Latin American identity, which is the Spanish language.

It is becoming clear that if the Spanish language is to become more gender inclusive, Spanish speakers will have to change their way of thinking. This is definitely attainable, not to mention necessary for acknowledging non-binary people’s identities. Language researcher Dr. Jose Medina asserts that “leveraging linguistic liberation as a way to value intersectionality” is something everyone should defend. However, the question of whether or not “Latinx” is a viable way to achieve this goal still stands.

Get with the program