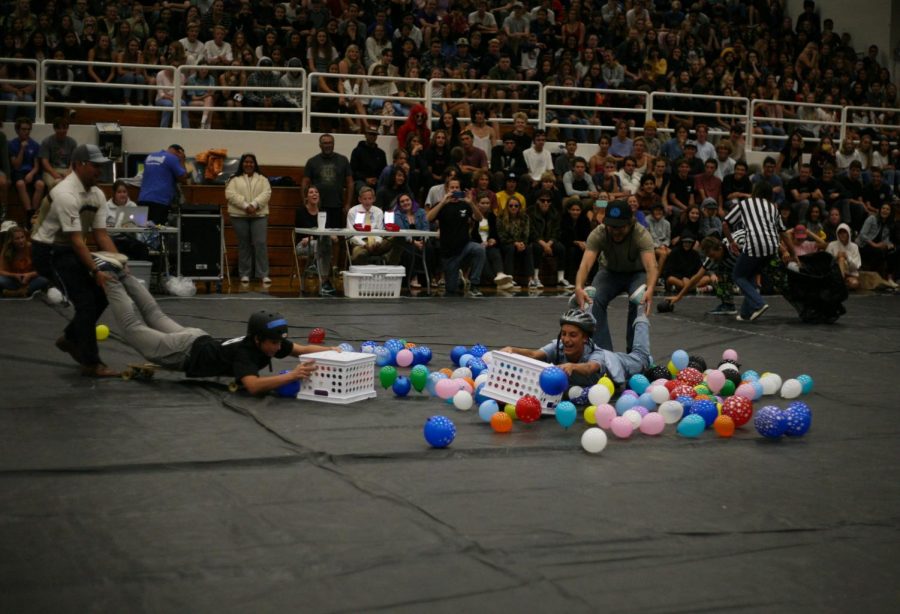 Spaghetti with lotion, a broken skateboard, and an impromptu buzzcut: Homecoming Assembly

All SDA students gathered in the gym this Friday for the Haunted Homecoming assembly. The rally gave students the opportunity to watch and engage in ASB organized games, student life videos, and to see who was announced on homecoming court.

As students filed in, they were greeted by Team Paradox on the center floor who showed off their dancing skills to “Cotton Eye Joe”. Once everyone was seated, the lights went out and students came together and shined their phone flashlights across the gym. Junior Grace Keefe kicked off the assembly with her rendition of the national anthem.

The emcees were quick to introduce the first game, which consisted of 4 teams of students and teachers to compete in a more physical version of “Hungry Hippos”. The team who collected the most amounts of balloon at the end of each round would win t-shirts. After the first round, Norris’s and Ramirez’s teams were eliminated, leaving the final to Fletes’ and Cameron’s teams. When the time is up, Cameron’s team falls short to Fletes’ grand total of 37 balloons.

The student life videos followed, which showcased students’ fears, scary school instances, a “what’s in the box” game, and fall sports. Then, following a school-wide song of “Happy Birthday” to a few students and staff, the homecoming court performances went underway.

From students dressed in fur coats to coordinated t-shirts and dances, each member of the homecoming court had something different to showcase. Sophomore prince Quinn Sbrega got his head shaved by a friend during his time on stage, while senior Wade Berner snapped a skateboard in half. The assembly concluded with a crossed-dressed entourage, who came out strutting crop tops and mini skirts.