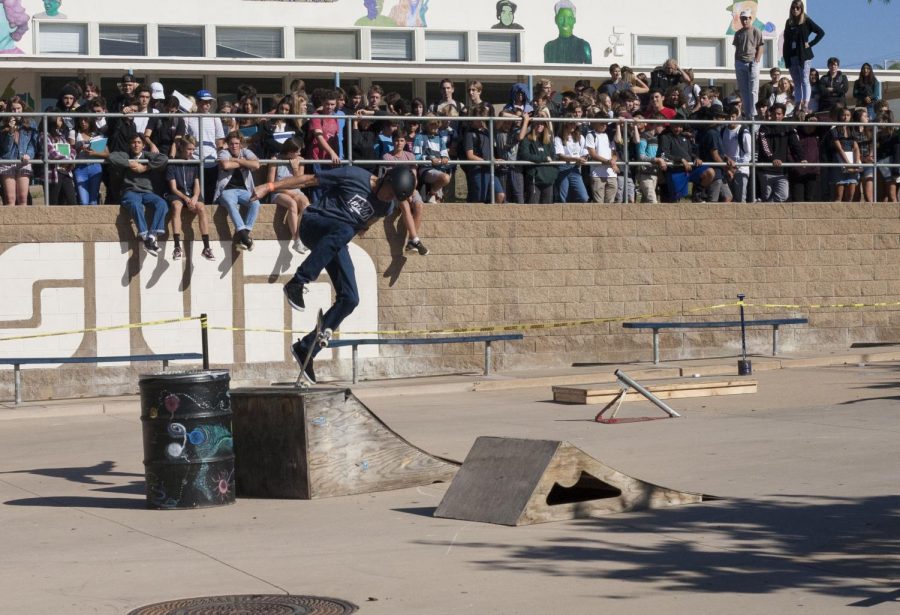 The quad outside the math and science building was alive with energy on Friday, November 9th, as the Rollin’ From The Heart charity skate demo commenced. Crowds of students gathered around the back entrance of the gym/ makeshift skate part, watching intently as Tony Hawk and Chris Cole performed double ramp jumps and kick flips.

The Elements, an SDA student band, filled the air with alternative emo-punk rock, accompanied by the rattling, rolling, and crashing sounds that resonated throughout the quad.

Sophomore Sierra Schumann said, “I came to SDA for the amazing culture that I had heard rumors of, and this event really surprised me. Something that’s usually prohibited by schools was being encouraged by the administration. It’s really cool to see that they recognize something [skating] that is such a big part of the culture here.”

As part of the event, students were encouraged to bring in their gently used clothing which would be donated to people in need; a mission statement of the Rollin’ From The Heart foundation. In exchange for clothes, students received raffle tickets with which they had the opportunity to win a hats, shirts, sunglasses, and even a new skateboard.

When Tony Hawk was asked what it’s like being a professional skater, especially one of his status, he said, “It’s fun, I get to do what I love for a living.” To those aspiring to skate as a career, he said, “Be willing to work at it, it’s not always fun.”

Rollin’ From The Heart’s representative ended the day with a quick thank-you to all the skaters that participated and students that donated to their charity. Besides all the tumbles and wipeouts, participating students came out unscathed and more than happy to show off their passion for a good cause.

In a post on his Instagram, Tony Hawk said of the event, “It was cathartic to be skating the same school grounds where I literally had my skateboard taken away for standing on it- and not moving- while waiting for the bus in 9th grade. And now I’m the old man saying ‘You kids don’t know how lucky you are these days! When I was at your school, I had to hide my skateboard from the teachers.’ Thanks to Principal [Adam] Camacho for embracing skateboarding as a positive outlet so future generations won’t have to struggle for validation.”

Matthew Hagan contributed to this story.