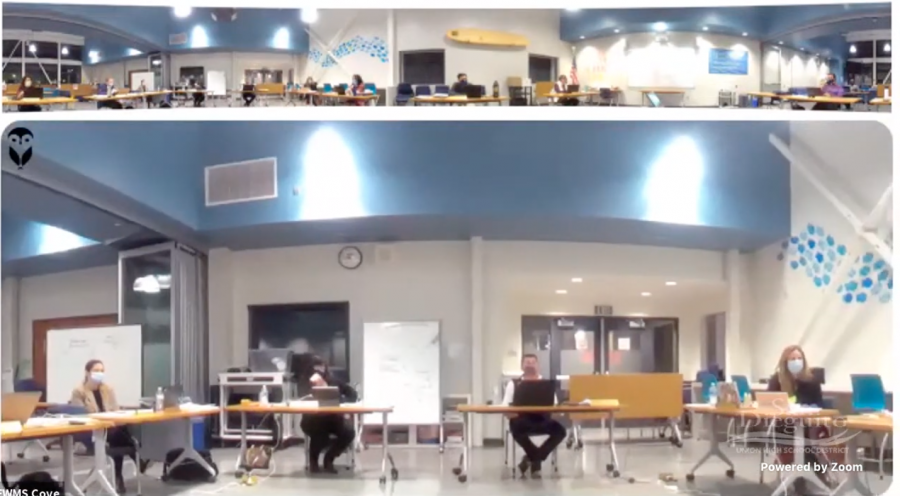 Screenshot of SDUHSD Board Meeting

Board members discuss the following at Earl Warren Middle School on Dec. 15 and Dec. 17

SDUHSD board reconvenes about budgetary concerns and the pandemic

The board meeting finishes what it started on Tuesday

DECEMBER 17– The SDUHSD board members reconvened Thursday to move through the agenda items left undiscussed at the end of their Tuesday meeting. Topics included substitute availability and pay during the COVID-19 pandemic, various budgetary concerns, and the student board members. All board members met in person except for Trustee Melisse Mossy, who engaged virtually, and Kristin Gibson, who was absent.

Due to a malfunction in beginning the live stream, the meeting available to the public began in the middle of public comments concerning teachers and substitute teachers when students return to in-person schooling.

“The teachers we have now are worth the time and investment we will spend on trying to attract substitute teachers,” said a commenter, who also wished for the board to mandate more frequent covid testing for students. Additionally, they criticized the board’s choice of the medical panel in the previous meeting, stating that they would have wished for “epidemiologists” to be included. “Your panel of physicians did not bring those specializations into the room,” said the commenter.

Another commenter raised concern over teachers having to leave or even quit at the onset of in-person schooling. “What happens to our kids if, right before finals, there is no teacher?… this would be a very public failure,” stated the commenter.

Commenter and SDUHSD parent Adam Fisher also raised concern over the legality of reopening schools in the district at this time. He claimed that it would be illegal if the district opens before the county is out of the purple tier.

Additionally, according to one commenter, a congregation composed primarily of students was protesting the board meeting outside the physical venue at the meeting time.

In response to these comments, Assistant Superintendent Cindy Frazee assured the public that the school board “would have an adequate number of subs [substitute teachers]” upon reopening. She stated that substitute salary was recently increased to $180 a day, and “since then, we have had six new people apply,” stated Frazee.

In response to the public’s calls to allow teachers to continue virtual teaching from home if they are otherwise unable to teach in person, Frazee told the public the district was looking into that. If a teacher needs to quarantine, “we are going to let them work from home remotely,” said Frazee, “but then we still need to have someone with the students back on the campus… so we will be using subs for that.” However, this policy is only currently in place for the second quarter and is not guaranteed for quarter three, where yesterday it was voted to allow 100% of students to return to school for five days a week in person.

Superintendent Robert Haley elaborated. “We can use campus supervisors, we can use other employees,” said Haley, even insisting that they can “move students from one classroom to another one on campus” if necessary.

When asked if the district has enough staff to handle the return to in-person education, Frazee was unsure. “My crystal ball, I don’t have it… healthcare leaves for forty teachers… twenty [teachers] for child care… I don’t know,” stated Frazee, referencing the percentages of teachers across the district who have filed for types of leave and aid during the pandemic.

During this discussion, Trustee Young wished to amend this motion to include a discussion on allowing teachers to continue teaching from home if they are otherwise unable to teach in person. “We have highly qualified, specialized teachers who are willing to teach,” said Young, and if they could extend their current accommodations in place, to “allow those highly specialized teachers to remain in their virtual classrooms… we accomplish everything.”

However, this motion was struck down, for adding it to the agenda without allowing the public 24 hours to comment would have violated the Brown Act.

SDUHSD Board President Mo Muir proposed a motion to raise substitute pay to $250/day (an increase from the previous salary of $180/day) during the covid emergency, which Allman seconded. Frazee was unsure if the school board could afford this salary increase, calling it “a shot in the dark” because they don’t know how many substitutes will apply to work during the pandemic.

The motion to raise sub pay to $250/day passed unanimously.

The remaining majority of the meeting touched upon budgetary concerns– documents to which the public did not have access and was discussed by the board to approve them for the following calendar year.

However, a portion of the board meeting also touched upon the student board members and discussed how to get them more involved.

Muir brought forth the motion to discuss having an experienced board member mentor-student board members. Muir suggested board member Mossy be the mentor because “she is good with children.” Young agreed. “I love the idea of giving them an even more powerful voice… than the one they were provided,” said Young.

Mossy was enthusiastic about the idea. “I would really welcome the opportunity for more communication with our student board members– their voices are critical and important, and I want them to feel valued,” said Mossy.

During this meeting, board member Micheal Allman asked to read a statement he had prepared beforehand. “I am not perfect, and my words don’t always come out with the meaning that I intend,” said Allman, referencing comments he made during the last board meeting. “But I value every single person involved in our district,” he continued. “We cannot ignore the sizable number of students who want a choice to return to school. At the same time, I support providing the teachers who have a medical necessity the choice to teach remotely… I hope you’ll forgive my misstatement, Carrie, Cassie, Devon, Tara, Skyler, and Xander. I value your input.”

No student board member commented on this agenda item, and the board resumed their budgetary discussions, the meeting coming to a close after about an hour and a half.