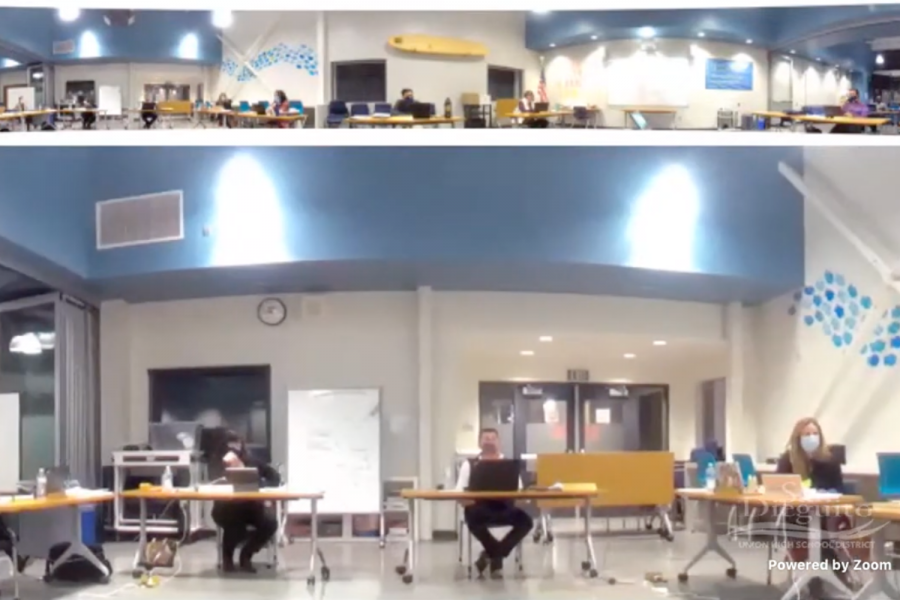 Screenshot of SDUHSD Board Meeting

Board members discuss the following at Earl Warren Middle School on Feb. 16, 2021

By Emily Broyles and Kylie Schwartz

The San Dieguito High School District school board convened on Feb. 16 to discuss new guidelines for reopening schools released by the California Department of Public Health and the Center for Disease Control.

After a two-hour closed session discussing various legal matters, the board reconvened and opened up the largest agenda item of the meeting: reopening schools for the remainder of the 2020-2021 school year and the contents and effects of the new reopening guidelines.

Some of the public comments delivered before board trustees discussed the topic dealt with concerns over reopening. Chiefly among their concerns were worries that people would not follow the safety guidelines once school campuses reopened.

“We all wish people followed instructions, but they don’t,” said one parent of a student in the district.

Another parent argued that the district does not have enough plans to reopen safely. Therefore it should not apply for the same Safety Review Request that the Coronado and Carlsbad districts received, which is a letter of intent from a school district officially requesting to reopen school campuses. If SDUHSD were to submit such a request, it could allow the district to return to on-campus instruction, despite the fact that San Diego County currently falls under the Purple Tier.

Additionally, a junior at Canyon Crest Academy said that while he would like to be back on campus, he wants to be safe above all else. He went on to say that to reopen now would be to “sabotage” all the good the school district has done by the students and parents.

Another student called for the board to follow all guidelines published by the CDC and hold off on reopening until teachers are vaccinated for students to return to on-campus education. However, it is important to note that the CDC does not currently classify vaccinating teachers as a prerequisite to reopening school campuses, according to their guidelines released on Feb. 11.

In contrast, some speakers want schools to be reopened, citing new CDC regulations and referencing distance learning’s negative effects. “Every student needs a choice,” one parent said, who continued to say that the true emergencies are “excessive screen time, isolation, depression, and self-harm.”

Other speakers also cited the lack of sports as damaging to students’ health and thus want to reopen schools once the board is legally allowed to do so. There is “no substitute for in-person interaction,” the parent of a Torrey Pines freshman said.

One parent in support of reopening schools cited the already-established hybrid system described in SDUHSD Reopening Plan. The board’s goal should be “helping students,” this district parent said.

Gavin Newsom, the governor of California, has made it clear that he also supports schools’ reopenings when it is safe to do so and hopefully as soon as possible. “At the end of the day, we can do this now as we administer more doses. Yes, prioritizing our teachers, more vaccines in people’s arms,” said Newsom in an interview with ABC News.

Some individuals also called for the board members to begin developing a plan for the 2021-2022 school year, in addition to current reopening efforts.

Additionally, Peterson noted that the San Diego County Public Health Department conducted school site inspections and reviewed the Safe Reopening Plan in January.  “We meet or exceed, already, all of the ventilation requirements” that the SDCPH outlines for schools in order to reopen, she said.

“I am mostly confident…that we could put kids back in classrooms today with what we have in place,” board trustee Katrina Young said.

In order to create the safest environment for students and teachers, however, the district needs to “gear up and get more people” in order to be prepared for the increased day-to-day measures taken to operate a school during the pandemic, Peterson said.

SDUHSD sent a Safety Review Request to the CPHD in hopes of getting the school reopened faster, according to Superintendent Robert Haley in a SignalKit message released on Feb. 17. The request was approved, and now the district must provide the proper forms and signatures before the county makes the final decision to allow the district to reopen or not. With an acceptance from the CPHD, schools could potentially open as early as March 8. However, there currently are no plans in place to return to school on March 8.

As schools move forward with the hopes of reopening, the district sent out a survey to parents and students to reassess how many students want to come back to on-campus education when it is an option, and also determine how many students wish to remain the in distance learning model for the rest of the year. “We will continue to offer all students the opportunity to remain off campus for full-time distance learning for the remainder of the school year,” Haley said in the SignalKit message.

Reopening schools is a matter of safety and finding what is best for students and teachers. Actions are being taken to move towards hopeful reopening. The main concern is how safe schools will be in-person and following the CDC guidelines will help secure more certainty in schools.

The SDUHSD board will reconvene on Thursday at 2:00 pm to further discuss these issues. The link to watch the live stream of the meeting will be posted on the district website once the meeting begins.