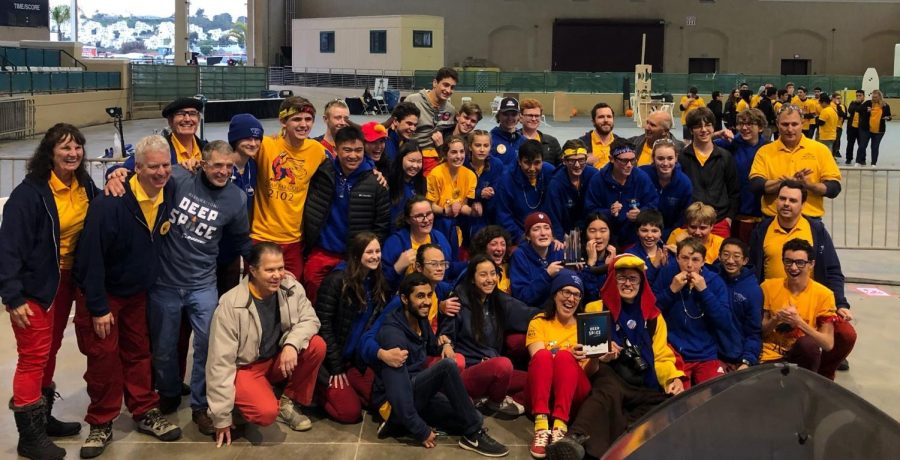 Opinion: Houston? We don’t have a problem.

Thirty-five teams from around the world came together to compete in this year’s challenge, Destination: Deep Space. The objective was for teams to construct a robot during the six-week build season. The robot was supposed to lift itself approximately two feet from the ground and deliver cargo (large dodgeballs) and hatches (large disks) to the cargo ship and rocket ships.

The first day-and-a-half of the competition were qualification rounds. By the end of match 50, we ranked 2nd. However, we ranked 5th overall.

Freshman Max Vennemeyer drove the robot: Something exciting I experienced, while driving with Freshman Liam Yellen, was when our alliance member, the SuperNURDS 3255 from San Pasqual High School, saved our robot from falling.In one match, an axle popped out of position on our robot named Flip. Our 122-pound robot was partially suspended in the air and unable to move.

Desperately, we yelled to our alliance to try and push Flip the rest of the way and onto the ledge. At first, all they did was park their robot next to us. But then, with 7 seconds to spare, the SuperNURDS 3255 rammed into Flip. Using the little resources freshman Liam and I had, we gunned the robot simultaneously with our alliance’s help then slammed into the arena wall.

The field faded to silence and the crowd roared with excitement. Not only did we make it to the ledge (and receive the points that came with it), but we did not break Flip. The SuperNURDS 3255 finished on the platform too, scoring even more points for our alliance. The judges tallied up the scores as we anxiously watched the jumbotron which t revealed that we won the match, putting us in 1st place at the time.

Senior Jenna Weinhofer spent most of my time observing the matches: As head scout, I track every team’s performance on each aspect of the game. In turn, this allowed our team to understand which team can efficiently and effectively perform tasks, regardless of their rank. It was interesting to see how each team’s strategy developed over the competition.

Our rapid decline in rank from first to fifth came from the red card we receive in our second-to-last match. Our elevator, which is used to climb and deliver cargo and hatches to high targets, extended over the driver wall. Essentially, it was deemed unsafe, but our programmers fixed the problem quickly before the alliance selections.

During the alliance selections, the top eight teams at the end of qualification rounds pick the two teams they want to compete with. We were the fifth alliance captain; however, the second alliance captain, Hawaiian Kids 359, selected us and Vikings 2984.

In the quarterfinals, our alliance won and got the highest score of the tournament.

We confidently went into the semifinals but then lost the first match with a score of 68 to 59 points–that is only a difference of placing three pieces of cargo. With Team Paradox continuously cheering in the stands regardless of the previous outcome, we came back to win the second match. Now, it was time for the tiebreaker.

Everyone in the stands grew nervous. No one chatted with one another, but rather, we watched the five-minute timer countdown to the start of the tiebreaker in silence. To our surprise, though, Vikings 2984 had technical difficulties. We had to select a reserve team to replace them.

Throughout the beginning of the tiebreaker match, we erupted in cheers. We hoped to make it to the finals, where we would have a chance to qualify for the FIRST World Championships. This dream was short-lived, as our replacement team, Clairemonster 5474, committed 20 points worth of penalties within the first 15 seconds of the match. They also committed three points by pinning the other team’s robot.

At the end of the semifinal tiebreaker match, we lost 61 to 82 points. It was heartbreaking to comprehend that the 23 total penalty points, if avoided, would have closed the 22 point gap.

Then, the awards ceremony commenced. We anxiously waited to hear if we won anything, and especially if we received an award that would qualify us for the FIRST World Championships. Teams were called one-by-one to the stage but not us. Then, there was only two awards left: the Regional Engineering Inspiration Award and the Chairman’s Award. Both highlight teams that perform well in competition as well as spread FIRST ideals and STEAM worldwide.

The announcer begun talking about the recipient of the Regional Engineering Inspiration Award, which, if won, would lead us to the FIRST World Championships. They then began describing the team’s achievements as a student-run team and their extensive programs in engineering and marketing. Instantly, I turned to senior Sarah Parkes, and we both started crying. We knew that we would go to the championships again.

Once the announcer formally announced our team, we jumped up in glee. Pom poms flew in the air and everyone starting chanting “We are proud of you, say we are proud of you” (note: Sarah and I were still crying in our seats).

With this award, NASA now sponsors us and granted us $5000, which will go towards our championship registration fee.

And while celebrating our win, the announcer also recognized the Dean’s List Finalists. Junior Blake Lieber and David Salzmann were nominated by our team to be Dean’s List Semifinalists for their commitment and dedication to our team and to FIRST. Then, we faintly heard “Blake Lieber” as the recipient of the prize. In celebration of the Regional Engineering Inspiration Award and Blake as a Dean’s List Finalist, many hugs, cheers, and tears were exchanged, as the Del Mar Regional concluded.

We are extremely fortunate to be a part of the Team Paradox 2102 family. We also cannot wait for our next regional in Utah on March 29-30.