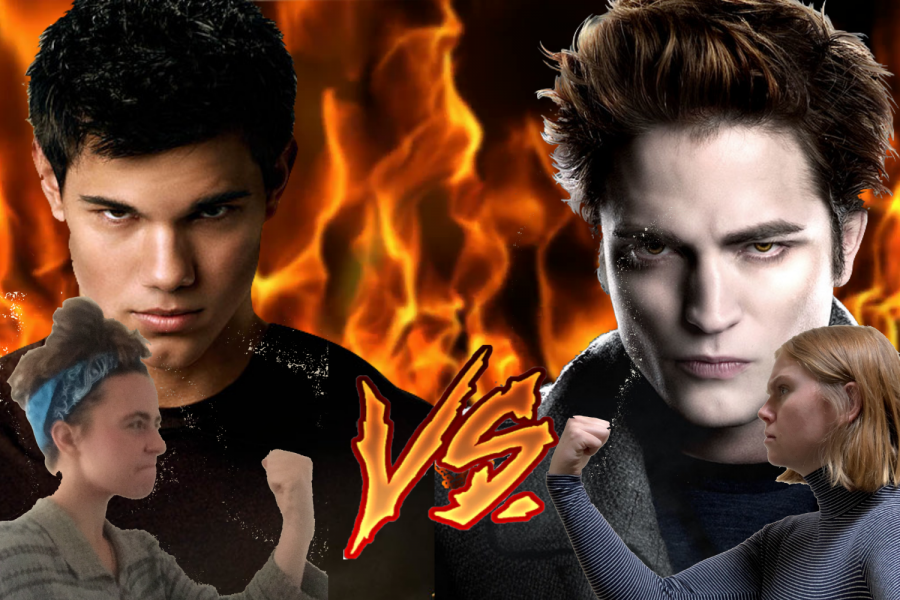 Who will win? Team Edward or Team Jacob? Let’s find out.

Which team are you on: “Twilight” Edward v. Jacob

By Kylie Schwartz and Olivia Lyons

“Twilight” is an enigma. The 2005 young adult vampire-romance novel defined a generation, be it through the movies, the merch, the fanfiction, or the books themselves. There are a lot of things to unpack when it comes to this series, but the epitome of the conversation– the dominating topic in any discussion of the series (civil or violent) is the debate over who is better: Edward or Jacob.

Two bright, promising young women sit down to discuss the eternal question: Team Edward or Team Jacob? Kylie is team Jacob, and Olivia is team Edward. Kylie read the books, Olivia watched the movies. Maybe that in fact altered things, but who is to say? All we know for certain is that the Edward v Jacob debate has been the sole, defining characteristic of our society for over a decade now, and it’s high time that we put the matter to rest.

Olivia: Hey! It’s Olivia and I am a firm proponent of Team Edward. Edward is all around the better choice for Bella, or for anyone really, on all levels, and nothing will ever change my mind. Edward is MVP, the GOAT, or any other acronym that could be used to mark him as superior.

Kylie: Kylie here! I’m arguing for Team Jacob. As much as I detest the label, I feel that Jacob is, indeed, the overall better choice of a boyfriend. Not even necessarily in terms of being Bella Swan’s boyfriend; just as a boyfriend (or simply as someone to have in your life) in general.

Olivia: First, and perhaps most obviously, Edward is hotter than Jacob. Yes, my attraction to Edward could just be deeply rooted in my attraction to Robert Pattinson in general, and yes, hotness is subjective, but I mean, come on. Edward has the hair, the jawline, and quite literally the most insanely cool eyes you could ever hope to see.

Kylie: Whoa, whoa, whoa–I think we are getting off on the wrong foot, here. What makes Edward hotter than Jacob? Jacob’s the epitome of that whole “tall, dark, and handsome” trope that Spongebob made a big deal about in that one episode where he’s trying to get all attractive. It might just be a preference thing, but you can’t say that Jacob is any less hot.

Olivia: You’re right that Jacob is hot, but not hotter than Edward, it’s just a fact. Jacob does have classic good looks, but Edward… And anyway, without sounding too shallow, Edward is rich. Like, bring-you-to-a-private-island-mansion-for-your-honeymoon rich. At that point of extreme wealth, it has to be a consideration. And he’s not awful about it either! I feel like he is often downplaying his riches, so you get the pluses of yachts, forest mansions, designer clothes, and fancy clothes without the drawbacks of having to deal with a snob.

Kylie: Alright, there are some cool things that come with having money; Jacob definitely doesn’t have those resources. However, Edward’s insanely rich vampire life leads to him unable to relate to Bella and her single-parent upbringing. Down the line, won’t Bella be happier with someone that understands her completely, and knows where she is coming from?

Olivia: I think, down the line, Bella would be happiest on a private beach sipping on tropical drinks and living a life completely unaffected by material worry. Plus, another piece of the Edward package deal is Alice Cullen. Buy one vampire boyfriend, get a super cool vampire bestie free. Doesn’t Edward’s family (namely Alice) add to the sense of family and understanding that his wealth apparently eliminates?

Kylie: Okay, sure, Edward’s family is decently cool–but so is Jacob’s! The whole wolf-pack brotherhood is certain to provide some necessary community in Bella’s life. Also, it would be a lot of fun to run around with epic werewolves– and it’s not like Edward is known for being much of a fun guy. In fact, Edward seems to actively struggle to have fun and doesn’t take himself seriously– would you really want to be stuck with such a guy for eternity!?

Olivia: Okay, I am a little scared of the idea of being alive forever, but being young and agile for the remainder of your years? Not a bad deal! Edward has gotten to experience the literal history and so much of the world because he is freaking immortal! And being with Edward offers Bella the same reality! She never has to get old, have arthritis and creaky old lady joints, or old person memory loss.

Kylie: Well, one thing which Edward can’t compete with is that Jacob doesn’t want to change Bella. Or, at least, it’s not a requirement for Bella to change to be with him. With Edward, she would have to become a vampire, and that doesn’t sound like fun. Can’t sunbathe, can’t have kids (Bella’s was weird and doesn’t count), and you have to watch all of your human loved ones die as you’re trapped in an ageless husk of a “human” body.

Also, Jacob is Bella’s age! I feel as though the books did not touch upon how weird it is that this 109-year-old got along swimmingly with a 17-year-old girl; such an age gap is bound to produce some differences in values, relationships, everything!

Olivia: But there is so much that she gains through becoming a vampire, and I think Bella’s made it pretty clear that being a vampire is something she actually really wants! Maybe she can’t tan, but she can certainly sunbathe- she has eternal body glitter! That’s epic. True, a relationship shouldn’t call you to change your personality, but gaining superpowers? I think that’s more of a pro than a con.

Also, speaking of age gaps– at least Edward didn’t fall in love with a baby.

Kylie: Okay, fine, but we are BOTH robbing the cradle. I guess we need to give both these boys a pass on this.

Olivia: Agreed. I raise you Edward’s cool-guy personality: he is thoughtful, artistic, and at times actually pretty funny. I mean, he plays the piano, clearly, there is emotional depth there. Let me just say that again for the sake of how awesome it is, he plays the piano. He is a piano-playing vampire who is a little quiet, very polite and considerate.

Kylie: You can say nice things about Edward’s personality (I guess), but the cold and oppressive old man has nothing against Jacob. Jacob is described as an openly warm, kind, and genuine person, and Bella always feels better when she is around him. Can the same be said for Edward?

Olivia: Well, at least Edward doesn’t have anger issues! I mean really, there is nothing less attractive than a guy who gets mad at the drop of a hat! At least Edward is civil and able to control himself, he’s the type you bring to a fancy dinner. Fancy dinners are important in my book.

Kylie: Fine, Jacob does have some anger issues, but at least he isn’t outwardly abusive! He doesn’t try to control Bella’s actions, gaslight her, or be secretive towards her at all. Sure, Jacob isn’t perfect– he certainly has his flaws– but one can accurately chalk that up to simple emotional immaturity that every sixteen-year-old can recognize. What is your argument, 109-year-old, Edward?

Olivia: Look, I have to agree with you here, Edward has some issues. He is a little possessive, maybe a little controlling, but he has had a troubled past! He is doing his best to keep the love of his life alive and do what’s best for her. I think when it all boils down, he just wants Bella to be safe and happy and isn’t that the best thing for a partner to be?

Kylie: Maybe, but then we return to that age-old argument: is being in Bella’s life really the best Edward can do for her? Also, going back to the fact that Jacob is emotionally warmer than Edward– Jacob is also physically warmer, and can touch Bella without killing her. Jacob’s body heat was a key plot point in “Breaking Dawn,” and his presence was probably the only thing keeping her from freezing to death! Having Jacob in her life actively keeps Bella alive.

Olivia: Okay, yes, Jacob has body heat. Big deal. That was a very specific moment in their lives, and honestly, the life-saving effects of Jacob’s body heat are probably only ever going to come in handy in that one scenario. Honestly, all that highlights is how secure Edward is in his own relationship and masculinity to let his girlfriend cuddle up with Jacob like that. Isn’t it possible for Bella and Edward to just have an epic blanket collection down the line? And, isn’t dating Edward kind of an awesome excuse to go spend some big bucks on super cozy, stylish blankets?

Kylie: Well, at least Jacob doesn’t present imminent danger to Bella’s family! We see in the books time and time again that even being in the presence of the Cullens attracts all kinds of bad folks to your neighborhood.

Olivia: I concede; the way that being with Edward affects Bella’s relationship with her parents kinda sucks. But, didn’t her mom kind of do the same thing? She chose her husband’s minor league baseball career over staying home with Bella! And anyways, Bella loses a few humans sure, but she gains a whole vampire squad!

Kylie: Vampire squad, shvampire squad. I raise you my final and most important argument: Taylor Lautner is Sharkboy and thus Jacob has Sharkboy energy. What more could you want in a relationship?

Olivia: Okay, yes, Sharkboy will always have a place in my younger self’s heart, but Rob Pattinson was Cedric Diggory, the Hufflepuff golden boy who is truly the ultimate dream. Just ask Cho.

To wrap up my closing argument, Edward is the dreamy choice. He presents a future and life full of charm and luxurious hair. Jacob is kind and open, but Edward’s real value shines through to those close to him.

Kylie: Edward may be the dreamy choice or whatever, but Jacob is warm, and kind, Bella’s age, and not actively abusive. He’s the right choice.

In summation, “Twilight” presented two truly awful boyfriends for Bella. Neither option was anything one would hope for their friend, daughter, or local sulky, whiny teenager. This battle is truly between the lesser of two evils, but at least we made our cases.

Now, to finally put this matter to rest and make a definitive decision between Team Edward or Team Jacob, head over to @sdamustang on Instagram to vote in our poll!

View Comments (5)
About the Contributors 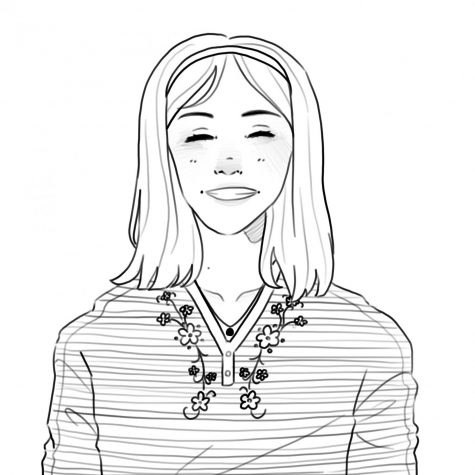